Catharine Street Community Center is a nonprofit, community based organization in the City of Poughkeepsie, NY. The Center’s vision is attributed to Mrs. Samuel Buck, key members of the Poughkeepsie Neighborhood Club, local clergy and other community leaders.

In the early 1900s, Mrs. Buck was deeply interested in young women of color becoming involved in civic and community activities. With the assistance of the Poughkeepsie Neighborhood Club members, she established a small club for girls, which met weekly at the YWCA of Dutchess County.

The club soon outgrew its quarters at the Y and was relocated to 69 Catharine Street, a building that had been donated to the Y by Dr. and Mrs. William Bancroft Hill.

In 1922, along with the new site, the community welcomed the first directors, Mr. Albert and Mrs. Georgine Kelly Smith. The popularity and growth of the club made it necessary to request assistance from the Y with staffing, organizing classes and recreational activities. Under the Smiths’ leadership, a varied program of educational, social, and cultural and religious work was carried on at the Center for 10 years.

The Depression hit hard, and due to the lack of funds, the Center was temporarily closed. It reopened in 1932 for a few days each week.

From 1936 to the mid 1940s, the Center carried on a successful program for young adults 18 to 25 years of age and developed extensive programming for adolescents. The organization was incorporated on April 23, 1942, as the Catharine Street Community Center, Inc.

In 1945, the Board of Management of the YWCA voted to donate the building at 69 Catharine Street to the Center in recognition of its work.

In the years that followed, Dr. Robert Wilfred Morgan, then President of the Catharine Street Board, and City Judge J. Corbally led a fundraising campaign to build a new and better-equipped structure. The new Center, which is adjacent to the original site, was dedicated in March 1979.

From 2003 to 2013, the high-profile, auditioned Catharine Street Community Center choir enabled school-age boys to enhance their self-esteem, leadership and basic skills through music. The program was donor supported via the Community Foundation of Dutchess County.

A collaboration of Vassar College, Catherine Street Community Center and the Poughkeepsie Tennis Club, the Kidz Squash program for boys and girls combined academic tutoring with squash instruction, community service and one-on-one mentoring. For nearly a decade, Kidz Squash helped each child reach their academic and personal potential through hard work, a commitment to learning, and developing athletic ability.

TODAY
The Center, under the leadership of a strong Board of Directors along with its highly qualified and professional staff, enjoys a spacious facility which is ideally located and accessible. These winning features attract more than 2000 children, family and community groups annually. 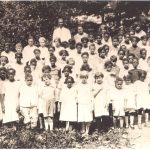 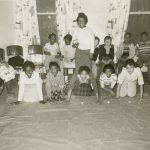 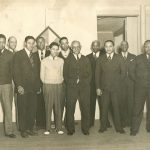 A Men’s Group gathering at the Center. 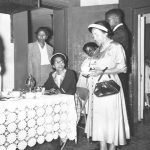 Community Members at a CSCC function, circa 1942. 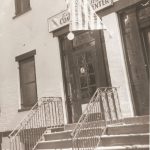 Outside of the original building at 69 Catharine Street. 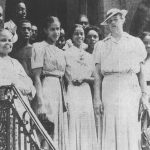 Eleanor Roosevelt on the steps of Catharine Street Community Center, 1937. 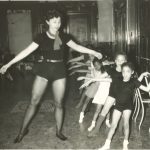 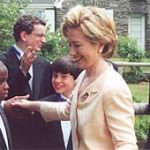 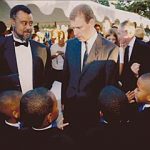 Prince Andrew of York, England with members of the Poughkeepsie Boys Choir, 2002. 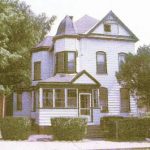 The future site of the Early Childhood Learning Center at 73 Catharine Street.